Here’s the very first review of KIN S FUR by Derek Newman-Stille of Trent University, Peterborough, Ontario, on his blog “Through the Twisted Woods.” The title of his review–“Telling Silences–is a perfect one for my erasure poems. 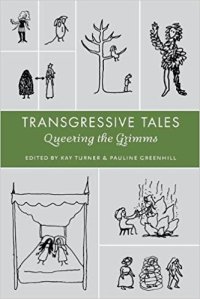 To read what I have written about the Grimm Brothers’ version of the international wonder tale called “Allerleirauh” (“All Kinds Of Fur”), you are welcome to read my book chapter — “‘But Who Are You Really?’ Ambiguous Bodies and Ambiguous Pronouns in ‘Allerleirauh'”— as a PDF, here. This book chapter was published in 2012 in the book Transgressive Tales: Queering the Grimms, edited by folklorists Kay Turner and Pauline Greenhill, and published by Wayne State University Press, as part of their Series in Fairy-Tale Studies. You can order the book Transgressive Tales here.

“The Cinderella No One Knows: The Grimm Brothers’ Tale of Incest, Fur, and Hidden Bodies”  —  To hear this talk of mine at the Library of Congress, click here. I discuss “All Kinds Of Fur” and I also read a section of my poems from ALL KINDS OF FUR. (The poems begin at minute-marker 44).

Here’s a summary of the Grimms’ tale “All Kinds Of Fur”:

“All Kinds Of Fur” tells of a princess whose widowed father develops a strong, carnal desire for her. She looks just like her dead mother, he explains, and, after all, her mother forbade him to marry unless he found someone who looked exactly like her. The princess gives her father four impossible tasks:  bring three gowns and a mantle stitched of a piece of fur from each animal in their kingdom. These tasks, alas, prove only too possible. When her father announces their wedding is the next day, she wraps herself in the mantle, covers her face and hands with ashes, places her gowns and three tiny gold treasures in a nutshell, and escapes into the forest. The neighboring king’s huntsmen find her sleeping in the hollow trunk of a tree, call her “All Kinds Of Fur,” and take her to the castle kitchen where she labors for years with the cook, until the king, in search of a wife, holds three balls. She disguises herself as a beautiful woman, dances with the king at the balls, and then disappears into the kitchen to make the king’s midnight soup. She drops one of her gold treasures in his soup bowl each night. During the last ball, he slips a ring on her finger, follows her, removes her fur mantle, and realizes who she is. They marry.

And here’s a place to read the tale “All Kinds Of Fur” (1812 and 1857 Grimm Brothers’ versions, translated by D.H. Ashliman) as well as other versions of the tale from around the world: