My book of poems: 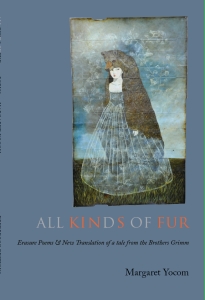 ALL KINDS OF FUR, my book of erasure poems, was  published by Deerbrook Editions, May 2018.  In these poems, I offer a new vision of Jakob and Wilhelm Grimm’s controversial tale “Allerleirauh” (“All Kinds Of Fur”), a lesser-known version of “Cinderella” that opens with incest. Erasing the Grimms’ words to reveal a young woman’s story of her journey to a new, full life, I ask, “What would All Kinds Of Fur say if she could tell her own tale? In ALL KINDS OF FUR, the heroine’s words rise.

(For more on erasure poetry, see the bottom of this page and my NEWS blogs on my Home page).

My poems in Journals, Anthologies, and more:

“The Last Piece / S’Letscht Schtick” and “Eating Alone” (reprint), with my Artist’s Statement on these poems, “Poetry and Folklore: Partners in Practice.” In The Food and Folklore Reader, edited by Lucy M. Long, pp. 449-454. (On wartime losses of foodways and language, especially those of my Pennsylvania German family). 2015. PDF, here.

124(493): 211-213. (My poem draws on a spirit world story from Newfoundland that I have always found mesmerizing and disturbing. It’s a tale told for true about a woman’s encounter with the fairies when she was out berry picking, and it’s undertones whisper of women’s survival strategies in the face of violence. You’ll find the story published in a  book I return to time after time: folklorist Barbara Reiti’s Strange Terrain: The Fairy World in Newfoundland . PDF of my poem, here.

“Donation.”   Beltway Poetry Journal, special issue on Museums. (My poem draws on stories I collected from logger, storyteller, and traditional woodcarver Rodney Richard, Sr., and on my work as curator of the Rangeley Lakes Region Logging Museum, Rangeley, Maine, which he founded with his family and other logging family of Maine’s western mountains).  2008.

“Directions.” In the “Poet’s Corner” column of The Daily Bulldog, western Maine’s online newspaper.  (My poem–published in August 2007, before the paper went digital– honors my friend, and fellow poet and Quaker  Hugh Ogden, 1937-2006, of Rangeley, Maine, and Connecticut. We honor his memory at the Ogden Memorial Evening of Poetry, the first Sunday of August in Rangeley, Maine).

“Opening Camp,” “Echo, at Lakeside,” “Where the Living Keep Watch,” “In Jewelweed,”  “The Cane, ” “Eating Alone.”  In The Folklore Muse: Poetry, Fiction, and Other Reflections by Folklorists, edited by Frank De Caro (Logan: Utah State University Press. (On living and working in Maine and // on my Pennsylvania German heritage). 2008.

“Eating Alone.”   Voices: The Journal of the New York Folklore Society. (On my Pennsylvania German heritage; revised version in the 2008 book, The Folklore Muse). 2006.

Essay on writing my poetry (includes poems):
2012. “Keeping Watch: The Practice of Poetry.” This link takes you to an excerpt (in color, with a photograph) from a longer article on poetry writing and my folklore fieldwork in a Maine mountain community, published in Voices: The Journal of New York Folklore. PDF of full article (in black and white) includes poems “First Wash,” “Opening Camp,” and “Tending White Cedar.”

Literary Non-Fiction:
1990. “Wave-walking.”   Friends Journal. 36: 9-10. (On the life and death of Bertha May Garber Davidheiser Yocom, of Douglassville, Pennsylvania, my grandmother)  PDF

ALL KINDS OF FUR, my book of erasure poems (Deerbrook Editions, May 2018)  takes as its source text my translation Jakob and Wilhelm Grimm’s controversial tale “Allerleirauh” (“All Kinds Of Fur”), a lesser-known version of “Cinderella” that opens with incest. Erasing the Grimms’ words to reveal a young woman’s story of her journey to a new, full life, I ask, “What would All Kinds Of Fur say if she could tell her own tale? In ALL KINDS OF FUR, the heroine’s words rise.

Erasure is a contemporary poetry-writing practice. Poets begin with a source text of any kind and then “erase” selected words and letters, using one or several methods—such as whiting or blacking out their selections, or “ghosting” them with a gray font. What remains are erasure poems. In my book, I ghost out the Grimms’ tale using gray font to reveal the erasure poems–All Kind Of Fur’s own story–in black font.

For information on erasure poetry, click here to see poet Dan Beachy-Quick’s review of and quotes from Ronald Johnson’s radi os, an erasure of Paradise Lost. For an online text of another translation of the 1857 version of “All Kinds Of Fur,” see the work of D.H. Ashliman, “All-kinds-of-fur”: click here.

Here are the titles of my favorite books of erasure poetry:

My thanks to poet Susan Tichy, George Mason University colleague and friend, who first introduced me to erasure. See her website and new book Trafficke.

This site uses Akismet to reduce spam. Learn how your comment data is processed.