Here’s an email from friends in Portland, Oregon, who wonder the same thing:

“Hi, Peggy.  . . . We stayed just one night at Cannon Beach and brought your book along. We read it aloud, first the [Grimms’ tale] text that combined ghosted print and boldface print, and then the poems in boldface. Is that how you’ll read it? Or some other way?”

Well, they’re close, but—I read ALL KINDS OF FUR some other way.

Because the conversation between the Grimm Brothers’ tale and the heroine of my poems has always been so important to me, I have always included both voices when I’ve read my poems—just as my friends surmised. But—since I want to highlight the juxtaposition, the contrasts, the differences between the two voices and to make them sound as immediate as possible, I have the two voices speak close together in time. 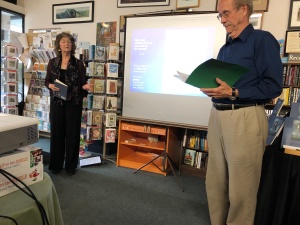 Rob Lively reads the story sections during his and Peggy’s performance at Devaney, Doak & Garrett Booksellers in Farmington, Maine. (Photo by Eileen Sypher)

Also, I ask a friend to help me perform my poems—always a gentleman friend, to keep in front of my audience the gender of the Grimm Brothers and to encourage people to wonder about gender issues in the tale and the poems.

So, my friend reads the tale section—the gray and black texts—on pages 1 / 2 of ALL KINDS OF FUR and then, immediately afterward, I read the erasure poem—the black text—on that same page. He and I read back and forth in this way for three to five pages, and then I read the additional erasure poems myself. 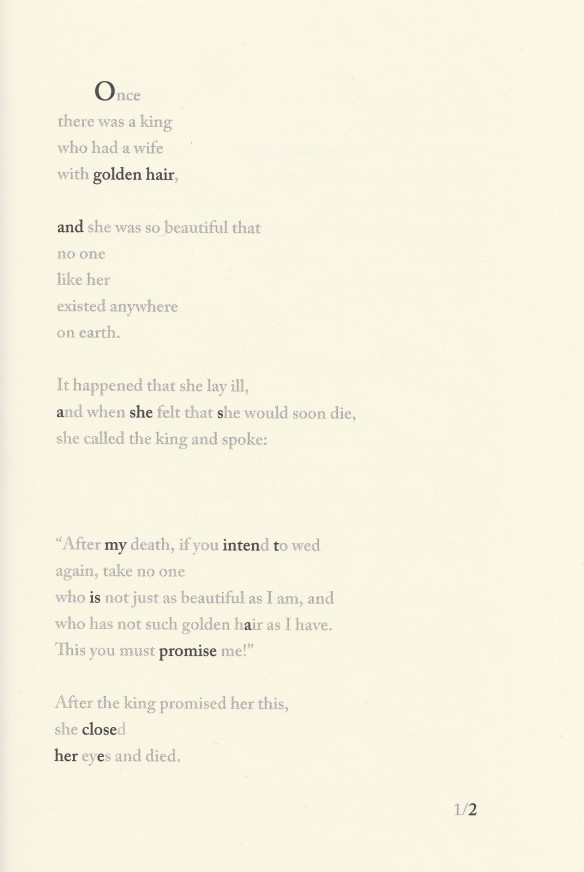 As we—and then I—read, I project images of the book’s pages on the wall behind me, using a digital projector and a PowerPoint program on my computer. This way, people can see the text of the Grimms’ fairy tale even when I am reading the erasure poem, alone.

Usually, I start my reading with a few slides that show examples of erasure poetry. And, for some audiences, I also discuss the surprising history of this controversial tale of the Grimms—a lesser-known version of “Cinderella” that opens with incest—and its international versions.

You can see what this performance looked like when I gave a lecture on the tale “All Kinds Of Fur” at the Library of Congress in Washington DC, and included a reading of several poems. My George Mason University colleague and MFA Poetry graduate Kevin Stoy graciously agreed to read the part of the Grimm Brothers that day. Our  reading begins at minute-marker 44 at this youtube site.

It has been a great pleasure for me to have friends such as Rob and Kevin accompany me on this journey to bring All Kinds Of Fur’s voice to life. I am grateful to them and to others who have helped me—and who are planning to help:

— Joseph Sobol, Prof. of Storytelling, Faculty of Creative Industries at the University of South Wales. Presentation at American Folklore Society.

Summary of the Grimms’ version of “All Kinds Of Fur”

“All Kinds Of Fur” tells of a princess whose widowed father develops a strong, carnal desire for her. She looks just like her dead mother, he explains, and, after all, her mother forbade him to marry unless he found someone who looked exactly like her. The princess gives her father four impossible tasks:  bring three gowns and a mantle stitched of a piece of fur from each animal in their kingdom. These tasks, alas, prove only too possible. When her father announces their wedding is the next day, she wraps herself in the mantle, covers her face and hands with ashes, places her gowns and three tiny gold treasures in a nutshell, and escapes into the forest. The neighboring king’s huntsmen find her sleeping in the hollow trunk of a tree, call her “All Kinds Of Fur,” and take her to the castle kitchen where she labors for years with the cook, until the king, in search of a wife, holds three balls. She disguises herself as a beautiful woman, dances with the king at the balls, and then disappears into the kitchen to make the king’s midnight soup. She drops one of her gold treasures in his soup bowl each night. During the last ball, he slips a ring on her finger, follows her, removes her fur mantle, and realizes who she is. They marry.